When anyone heard the mention of Clifford Orji, fear rings down the spines of both young and old, even weaning children. Clifford has terrorised Oshodi residents by not just killing and robbing them, but he made a barbecue of his victims body.

Below is the account of his arrest and things that follows:

Who is Clifford Orji?

Clifford used to sell razor blades at the bustling Oshodi market several years ago. Then he shifted his abode to a self-created grotto under the highway bridge in Isolo, where he advertised himself as a “native doctor Chinneyelu”.

Occasionally, he violently pursued stray-walkers to his “sanctuary” during day time. In the dead of the night he usually blanketed the air around him with the meat-like odour from his special barbecue.

People merely suspected that this barbecue- loving recluse was not normal; that he was possibly mad. But no one was prepared for the horrendous discovery of last Wednesday: that Orji was also a cannibal – a man eater!

Crowds gathered at Toyota bus stop, Oshodi Isolo expressway, the former kitchen of the Lagos cannibal, Clifford Orji. The cannibal was arrested Wednesday, February 3, 1999 by the police after the cries of Awawu, a gaunt and shackled woman from Agege gave him away.

Clifford and his accomplice, Tahiru have been singing to the police in Lagos on why they had been killing fellow human beings for dinner. People always suspected that Clifford Orji was queerly different.

The discovery sent shock waves throughout the sprawling metropolis of seven million people, drawing hundreds of people to the under-the-bridge abode of Orji, where he also kept a well-kitted kitchen to prepare cooked and roasted human flesh! How long the afro-haired man from Enugu State has been feeding on human flesh in Lagos is unknown.

How many people he has slaughtered for dinner is also unknown, as Orji has not revealed much during police interrogations and even the parade before klieglights and journalists in Lagos Thursday, the 4th of February that year.

A shrill cry of a famished and emaciated lady, waiting to be slaughtered, was what gave up Orji Wednesday.

The noise attracted passersby who not only discovered the woman but also stumbled on a phalanx of human parts in Orji’s make-shift home. Human bones, skulls, legs, hands, freshly cooked soup with human meat, were discovered.

The uproar triggered by this shock discovery was said to have attracted men of the Operation Sweep. Surrounded, Orji attempted to escape.

But the police quickly arrested him and took him to the Makinde Police Station in Oshodi, nearby. The lady being dressed for slaughtering, and who Orji had turned into a sex-slave for several days, was freed and taken to the hospital in Ikeja.

The arrest of another person, said to be Orji’s accomplice in the human-flesh eating business introduced a new dimension to the tragedy. Police have since found that Orji and his friend were not just human eaters, they were also human spare-parts sellers, as money, cheques were said to have been recovered at the make-shift home at the popular Toyota Bus Stop on the Oshodi-Isolo Expressway.

Were Orji and his accomplice mad? Some people interviewed at the scene of the tragedy believed they are sane. Some did not. “What evidence do you have to claim that he’s mad,” said Chuks Igbokwe who spoke with the National Concord. “As far as I am concerned, he might be one of these Otokoto ritual murderers who trade in human parts. If he is mad, why should he kill and eat his victims?” People who frequently passed by Orji’s make-shift home of horror recounted incidents when they were chased by the iron-rod wielding Orji; incidents when his potential victims escaped by the whiskers; incidents when the smell of his human barbecue pervaded the environment. 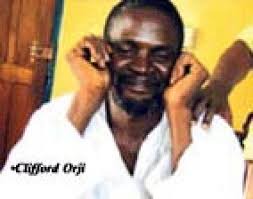 The controversy about Orji’s mental state will linger for some time. Up till this morning, Lagosians continued to troop to Orji’s former home as news of Orji’s cannibalism spread.

Besides Orji was a middle-aged man, unidentified by the police, and who was bleeding on his nose and mouth. Mr. Sunday Aghedo, the state commissioner of police, described the two men as human eaters.

On display beside them were roasted parts of human beings – heads, leg, hand and the abdomen. One severed head wore a permed hair of a lady identified as “Eno”, a trader from Akwa Ibom.

Aghedo continued: “These are the men who were arrested yesterday by members of the Operation Sweep.

They were arrested with human parts in their enclave at the local airport area and taken to Makinde Police Station. They are now answering questions on homicide at the State Crime Intelligence Department (SCID)”. When it was his turn to speak, Orji confessed to the media men: “We are human meat eaters. We have killed over three people, especially young girls who hawk wares. We always lured them to our enclave under the pretext that we wanted to purchase their wares. Once they are in our net, we pounced on them and killed them for eatable meat. My colleagues is the human hunter while I am the butcher. We usually go for girls with permed hair.”

“Why, have you taken to human eating; is it because you cannot afford animal meat?, “a journalist asked Orji. Orji replied: “We have been eating human meat for the past seven years before coming to Lagos. It is our culture to eat human meat”.

“If you are a free man today will you still be eating human meat?” Orji was asked again.

“Yes, to me there is no difference between human and goat meat,” Orji replied. The lack of remorse by the cannibals is making the police doubt the mental state of the men.

“They may be victims of psychic and spiritual problems. Before prosecution, we have to send them to psychiatric home for medical examination. Who knows, they maybe mentally sick”.

Mr. Aghedo said. Cannibalism is a taboo in Lagos, but in some parts of Nigeria, especially, in the south east states of Cross River and Calabar, human meat eating is not strange.

There were reports of food vendors selling human meat as animal meat to unsuspecting hungry travellers.

Inside the Cannibal’s Kitchen

4. Grill on another metal bowl

9. A gaunt lady waiting to be slaughtered

To be continued in the next episode…

Sun Jan 5 , 2020
The Kano Sharia Police best known as Hisbah have raided a party allegedly organized by Homosexuals to celebrates their togetherness. The Sharia law enforcement operatives invaded a compound located at Sabuwar-Gandu quarters in Kano metropolis, where the suspected homosexuals were arrested, prior to the commencement of the planned party. Our […]

FG Is Set To Evacuate Nigerians In Abroad