In a video shared on Instagram Lola Omotayo-Okoye, wife of singer Peter Okoye, asked why Nigerians are being kept in the dark regarding the whereabouts of President Buhari’s Chief of Staff, Abba Kyari. She pointed out that there’s so much secrecy surrounding his whereabouts.

Lola’s statement comes after Abba Kyari tested positive for COVID-19 and was moved from Abuja to Lagos for treatment.

The Lagos state Commissioner for Health, Professor Abayomi said at a recent press briefing, that he has no knowledge of the whereabouts of Kyari in the state.

The Minister of Health, Osagie Ehanire, has also told newsmen that he cannot reveal the whereabouts of Kyari as every patient has a right to privacy, thereby sparking reports that the President’s aide was not in any isolation centre.

Reacting to this, Lola said to the FG in her video: “Information is key. Do not lie to us. Do not keep away information.”

Well, Bashir Ahmad, the Personal Assistant on New Media to President Buhari reacted to Lola’s video on Twitter, writing: “Though I really don’t know who this Lola is, but someone close to her should pls tell her to leave Abba Kyari to recuperate in peace, he’s in Lagos & responding well to treatment. If it’s caring she should also use the same energy to ask the whereabouts of other #COVID19 patients.” 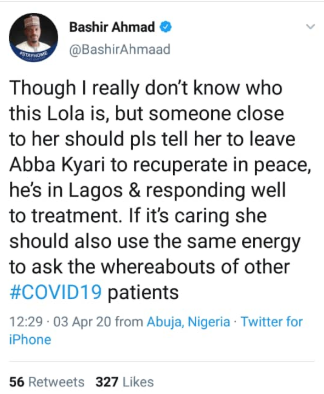 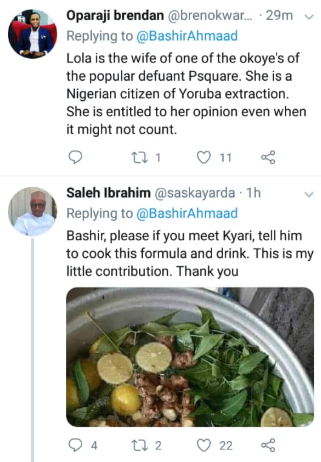 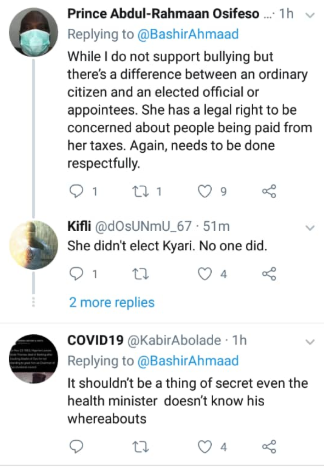