We Are Available 24/ 7. Email Us.
info@jeossyjs.com
Find us here
News Uncategorized

Gunmen have abducted six people in Kaduna, 5 brothers from the same parents were sleeping  when the kidnappers broke into their home.

The boys, who are between the ages of 8 and 18, were kidnapped in Gonin Gora area of Chikun local government area of Kaduna state.

The boys were sleeping in their home in the late hours of Thursday, June 4, when the kidnappers stormed the home, beat them up, and took them away.

Their father, Mr Bamidele Awelewa who narrated how the incident happened, said the kidnappers gained access into his compound by breaking the fence and later forced themselves into the main building.

He explained that they were armed with dangerous weapons and they beat up his children before whisking them all away.

Awelewa said that he and his wife were later released by the kidnappers and were asked to look for money to pay the ransom for the release of their five children or else they will be killed. 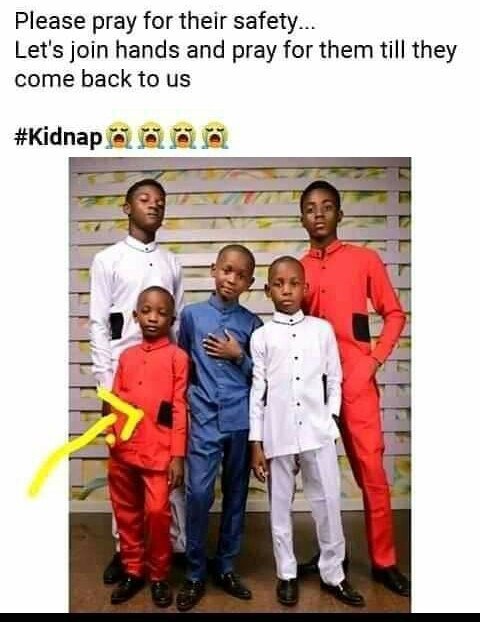 His wife, who is still in shock over the incident, appealed to the government to assist them to secure the release of their children.

ALSO READ: How UNIPORT Students were killed by deadly kidnappers

The Kaduna State Commissioner for internal security as well the Commissioner of Police visited the family of the boys to commiserate with them and also to get first-hand information about how the incident happened.

The Police commissioner, while assuring the residents that everything is being done to tackle the problem of banditry and kidnapping in Chikun local government, also urged them to always provide the security agencies with useful information that will lead to the arrest of criminals in the area.

How UNIPORT Students were killed by deadly kidnappers