Donald Trump’s campaign ralies are back, as the US President has announced he is set to have his first campaign rally next week Friday, the first time he’ll be doing so since the Covid-19 pandemic started in the US.

His first re-election campaign rally will be held in Tulsa, Oklahoma on the 19th of June, known as “Juneteenth”, the date that African Americans celebrate the end of slavery.

In 1921 the city of Tulsa was the site of one of the worst massacres of black people in US history and during an unannounced event at the White House on Wednesday Afternoon, Trump surrounded by prominent black supporters, said he wants to get back on the campaign trail with his stadium-filling rallies.

Trump revealed plans to go to Florida, Arizona and North Carolina, swing states he won in 2016.

When asked following the Cabinet Room event Wednesday afternoon about his trip to Dallas, Texas for a fundraiser on Thursday, Trump revealed he will travel next Friday, June 19 to Tulsa, Oklahoma for a rally.

‘They’ve done a great job with COVID, as you know, in the state of Oklahoma,’ Trump said.

He claimed: ‘We’re on our way to a very big comeback.’

On Tuesday morning, Trump first revealed he wanted to bring back the rallies as early as next week.

‘BIG DEMAND! Starting up again soon, maybe next week!’ the president tweeted, suggesting that the rallies could be held outside just like the protests.

The tweet included a post from journalist Byron York who said: ‘Given recent gatherings, seems reasonable time for President Trump to resume holding rallies. Could be held outside. Give out masks at entrance, encourage use. But mass gatherings are now OK. Biden could re-start, too, of course.’ 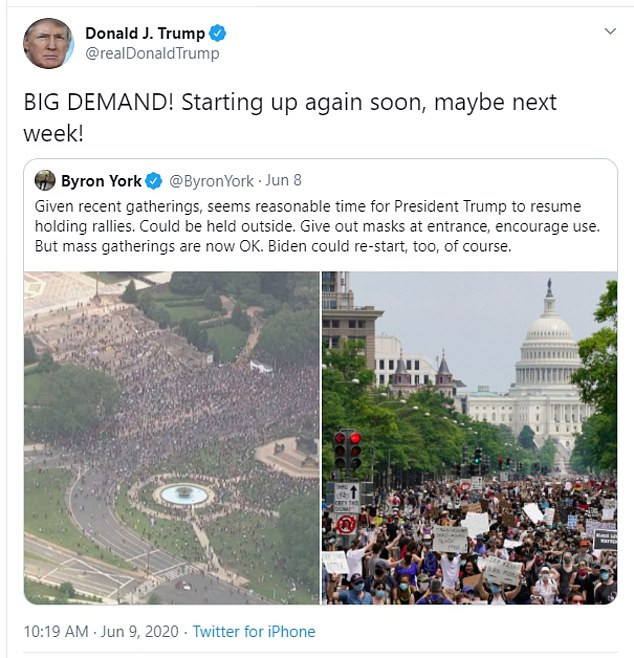 Tags:Trump to hold his first post-Covid-19 rally next week on the day African Americans celebrate 'end of slavery'
Share:
Facebook0Tweet0LinkedIn0Pin0