“It was like a miracle, a beautiful scene’ – US president describes George Floyd protesters getting tear-gassed by National Guard

US President, Donald Trump has reacted to the US National Guard using tear gas to disperse Black Lives Matter protesters in Minnesota .

Trump described the use of teargas on protesters who took to the streets in response to the killing of George Floyd, a black American who died last month when a white Police officer Derek Chauvin kneeled on his neck in Minneapolis, as a ‘beautiful scene.’ .

Speaking at an event in Dallas, Texas, the president shared his views on efforts made by the Minnesota National Guard to restore order. 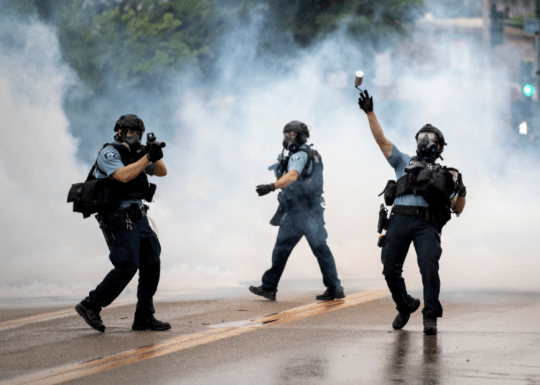 Trump said: ‘It was like a miracle. Just everything stopped. I’ll never forget the scene, it’s not supposed to be a beautiful scene but to me it was. After you watch policemen run out of a police precinct.

‘And yes there was some tear gas and probably some other things. And the crowd dispersed and they went through. ‘By the end of the evening… everything was fine and you didn’t hear about that location having problems anymore.’

A video of the president’s comments was obtained by The Washington Post. Trump also said he wanted police reforms to push officers to show ‘compassion with force,’  while rejecting calls to defund police forces across the country.