A man who wanted to carry out DNA tests for all four of his kids has changed his mind and chose instead to “claim them with faith.”

The man, Chidi Okafor, said he became “restless” when the issue of paternity tests kept coming up on Facebook. He then decided to get his kids tested when his wife was not around.

However, he gave up on that quest when he heard how much it cost.

Ever since DNA issue raised up, I became restless

Just yesterday morning immediately after my wife left to work, I quickly prepare my four children, drove them to a general hospital far away from home for DNA,

After reading all the comments and the manner people talked about this yesterday , I thought it was going to cost nothing,

Not until I was told the cost for each 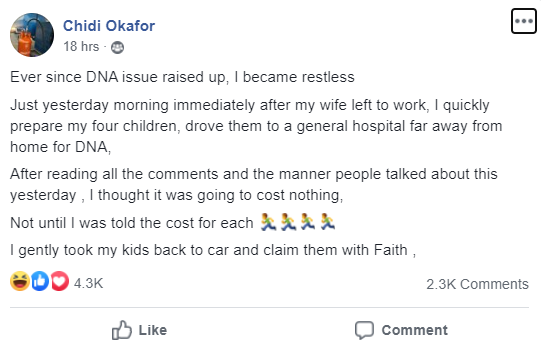 Tags:Man explains why he gave up on carrying out DNA tests on his 4 kids and chose to "claim them with faith"
Share:
Facebook0Tweet0LinkedIn0Pin0

Three men indicted in the death of Ahmaud Arbery