Family Guy voice actor, Mike Henry, has announced that he will be stepping down from his role as Cleveland Brown because a coloured actor ought to play the role since Cleveland is a coloured character.

Mike Henry, 54, who has voiced the character of Cleveland Brown for two decades on “Family Guy,” said on Friday that he is stepping down from the role on the FOX animated series.

He wrote on Instagram: “It’s been an honor to play Cleveland on Family Guy for 20 years. I love this character, but persons of color should play characters of color. Therefore, I will be stepping down from the role.” 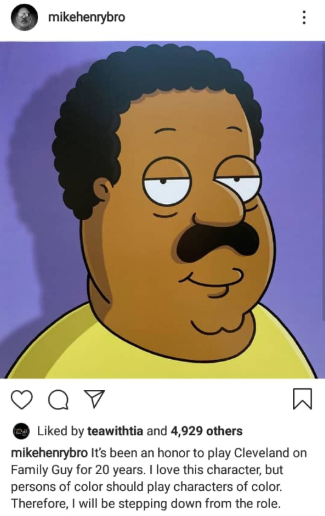 Henry, who is a white man, has voiced the character since the series debuted in 1999. He has also been the voice behind a Latin maid named Consuela on the series.

Airports are about 90% ready for reopening- Minsiter of Aviation, Hadi Sirika