US President, Donald Trump has denied reports the White House inquired about getting his face carved onto Mount Rushmore alongside past US presidential greats but has suggested that it “sounds like a good idea”.

Mount Rushmore National Memorial is a huge sculpture carved into the granite face of Mount Rushmore, situated in the Black Hills in Keystone, South Dakota.

US presidential greats like Abraham Lincoln, George Washington, Thomas Jefferson and Theodore Roosevelt all have their faces carved on the Mountain, but Trump has said it “sounds like a good idea” to have his face alongside the legendary presidents even though he denied reports the White House inquired about getting his face carved onto Mount Rushmore. 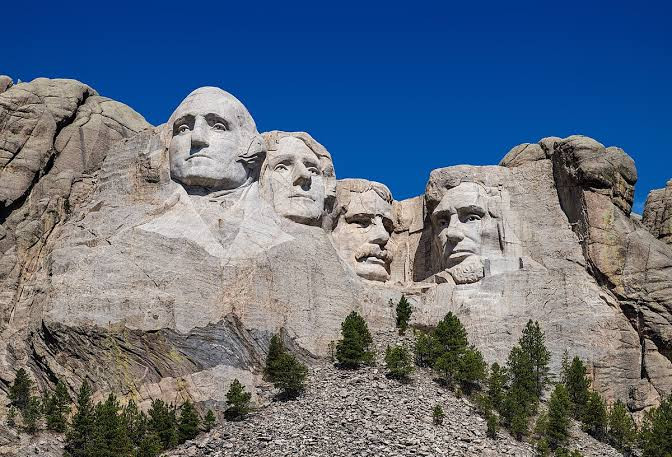 According to a report by the New York Times, an official approached the office of South Dakota governor Kristi Noem last year to find out what the “official process” is for adding a president to the national monument that bears the likeness of four of the country’s most famous leaders.

According to Ms Noem, in 2018, Mr Trump told her it was his “dream” to have his face on Mount Rushmore.

She said it was during their first meeting at the Oval Office.

“I shook his hand, and I said, ‘Mr President, you should come to South Dakota sometime. We have Mount Rushmore.’ And he goes, ‘Do you know it’s my dream to have my face on Mount Rushmore?'”

Ms Noem thought he was joking.

“I started laughing,” she said. “He wasn’t laughing, so he was totally serious.”

Mr Trump on Monday dismissed the NYT report as “fake news” in a tweet.

“Never suggested it although, based on all of the many things accomplished during the first 3 1/2 years, perhaps more than any other Presidency, sounds like a good idea to me!”

Mr Trump also joked about the idea during a July 2017 rally in Youngstown, Ohio .

“I’d ask whether or not you think I will someday be on Mount Rushmore,” he said at the time.

“But here’s the problem: If I did it joking, totally joking, having fun, the fake news media will say ‘he believes he should be on Mount Rushmore’.

Covid-19 is proving exceptionally difficult to stop,” -WHO