Men of the Rivers State Police  have arrested a man who allegedly defilled his three daughters, aged 9 months, 3 and 5 years old in Elekahia, Port Harcourt.

The Chairman of the Civil Rights Council, Rivers State chapter, Prince Wiro, who confirmed the incident on Wednesday, September 9, said the suspect was arrested following a report lodged by his wife.

Speaking to a journalist, the distraught mother said medical test conducted on the children by the Doctors Without Borders confirmed that there was penetration and their hymens tampered with. She also claimed that the older girls revealed that their father had been molesting them.

The suspect, it was gathered, was dragged by youths from his home at Boms Street and handed over to the Elekahia police station. 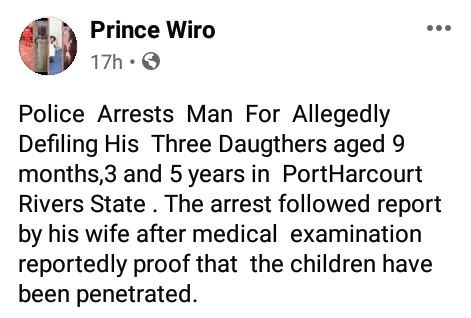 A Senior police officer, who spoke on anonymity said the matter would have been charged straight to court so that the suspect can be remanded in prison custody if not for the COVID-19 pandemic and non-admittance of new inmate prisons.

Thu Sep 10 , 2020
Femi Fani-kayode Berates Tinubu For Not Standing Up To Greet Ooni Of Ife     Femi Fani-Kayode, a former Minister of Aviation, has berated former Lagos State governor, Bola Tinubu, for failing to stand up to greet the Ooni of Ife at the Coronation of the Oniru of Iruland in […]