A female Corp member has accused officers of the Nigeria Police Force in Ogbaru Local Government Area of Anambra State of assault and brutality.

The corps member, whose name was given simply as Akinlabi to protect her identity, said the harassment began on September 17 when men of the Special Anti-Robbery Squad broke into her compound while she was asleep and pointed a flashlight to her face while claiming to be looking for “yahoo boys”.

Narrating her ordeal to SaharaReporters on Tuesday, September 22, Akinlabi said:

“On 17th of September 2020 by 2:00am, a team of people broke into our compound claiming to be SARS and searching for yahoo guys. They broke my window net, pointed their torchlight at my face while asleep and commanded me to open the entrance door for them.

“I was scared to do as commanded because I couldn’t identify who they were, rather, I shouted and ran into the passage for help.

“On getting to the passage, I saw another set of people at the window threatening to deal with me if I did not open the door. As I continued to shout for help, one of my neighbours opened her door for me and I entered her room and was shocked as they still came to the window of the woman insisting that we must open the door or they would break the door.

“Some of them later broke into an empty room by cutting off the burglary and entered the passage. The others broke the burglary of the room we were, opened the door for others to have access to the room. They started assaulting me by slapping and hitting me with cutlasses and sticks. 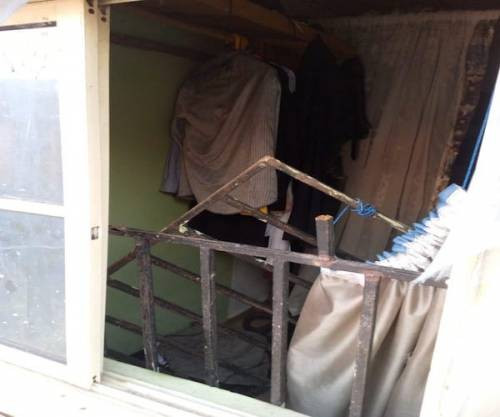 “At this point, I was practically naked and had to plead with them to allow me to put on my clothes which they eventually allowed but violated my privacy as I was forced to dress up in their presence. The beating continued after that and I got handcuffed like a common criminal for an offence I knew nothing about. They threatened to lock me up for 48 hours for refusing to open the door for them.

“I and another guy in the lodge were taken to their van and they asked us to stand in the rain for hours. They insisted on us giving them money for fuel before we could be released. We were released when they realised we were not ready to give any money.”

Akinlabi said she reported the incident to NYSC officials in the state and was asked to make an official report at the police station, but she claims her report was falsified and never shown to her.

She told the publication:

“The following morning, I called my LGI first and my PPA principal and they both asked me to go to the police station to make a report.

On getting there, one officer initially refused to take my complaint until she was informed that the DPO was aware of the incident.

“In spite of this, she insisted on writing my statement by herself and in her own way. Please note that I never wrote or signed any statement at the police station as the officer refused to allow me to do so,” she said.

Akinlabi, who says she currently fears for her safety and that of her family, called on the Inspector-General of Police, rights groups and the international community to investigate the brutal invasion of her residence and assault against her and bring the officers involved to book.

She also asked the IGP to see to it that she is duly compensated for damages done to her physically and on her properties in the process of the crime committed against her while serving her country.