Ugandan President Yoweri Museveni, 76, has won a sixth term in office amid vote-rigging claims from his opposition challenger, Bobi Wine.

The country’s electoral commission announced on Saturday January 16, that Museveni received 58% of votes and Wine 34%, and voter turnout was 52%.

Byabakama urged the population to “remain calm and accept the outcome of these elections” while reminding those celebrating to be mindful of the COVID-19 pandemic.

Wine, a 38-year-old former singer who was hoping to unseat the long-time president as he has been in power since 1986, has dismissed the Thursday election as a “complete sham”.

He claimed victory Friday, asserting that he had video evidence of vote-rigging and saying “every legal option is on the table” to challenge the official election results, including peaceful protests.

Election commission chairman Justice Simon Mugenyi Byabakama said “the onus is on candidate Kyagulanyi to show how votes are rigged.”

Wine, whose real name is Robert Kyagulanyi, later took to Twitter to raise an alarm over a military siege at his home as the country.

“They jumped over my fence. They came inside my compound. They are here right now. I don’t know why they’re here. But I’m imagining they are here to harm me. I feel threatened,” said the 38-year-old, who described the invasion as unprecedented and “a siege”. 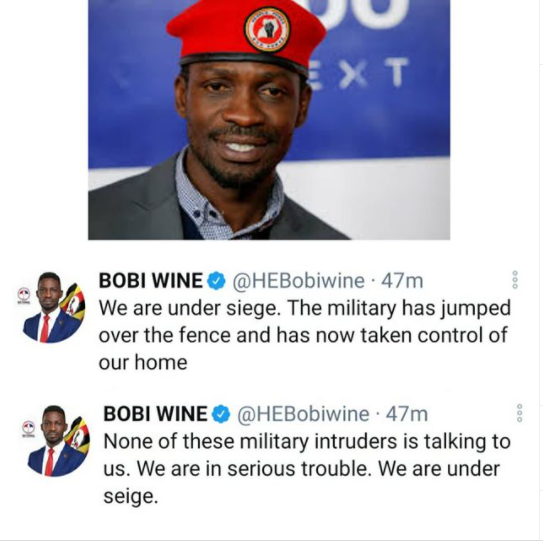 However, the army’s deputy spokesman Deo Akiiki said the soldiers were there to provide security and had stopped three people who tried to “access the house”.

Lagos Orders Civil Servants To Work From Home Till Feb 1