A suspected terrorist has stabbed eight people in Vetlanda, Sweden, police have said.

No deaths have been reported but police have shot a man in the leg who is now receiving treatment in hospital as officers guard his bed.

The incident happened around noon on Wednesday, March 3.

At 2.54pm, emergency services received calls from the area near Bangårdsgatan regarding an attack at 2.54pm.

Ahead of a press conference expected on Wednesday evening, Minister of the Interior Mikael Damberg said: “Several people are seriously injured. 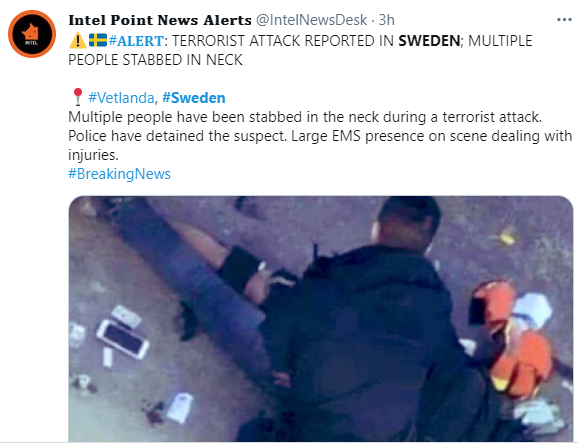 “These are terrible events and my thoughts go to the victims and their relatives. Right now it is unclear exactly what happened and what the motive was.

“The police have arrested a suspected perpetrator and have initiated a special incident to handle the development of the incident and create security in Vetlanda.”

Karl Melin, press officer for the Säpo security police, told the Aftonbladet newspaper: “We cooperate with the police and if it turns out that it is a terrorist crime, we will be more involved.

“When it comes to suspected terrorist crime, it is the normal security police who investigate it.”

Police spokeswoman Angelica Israelsson Silfver told the same paper: “Some are seriously injured and some are slightly injured, but no one is dead.”

Police are not looking at any other perpetrators behind the attack.