Former Presidential spokesperson and Pastor, Reno Omokri has shared his thoughts about polygamy in the Christendom.

According to Reno Omokri, the scripture is silent on polygamy and he doesn’t know if it is a sin.

The Pastor who noted that most of the holiest men in the scriptures are polygamists, stated that he won’t give a judgment on polygamy where God has not given a command. He concluded by stating that he has respect for polygamists than adulterers.

Someone asked me if polygamy is a sin. Scripture is silent on it. I dont recommend it. However, Some of the holiest men in Scripture (David, Abraham), were polygamists. Pastors shouldn’t be polygamists, But in my OPINION, I dont know if it is a sin

I won’t give a judgment on polygamy where God has not given a command. But, personally, I have more respect for polygamists, than adulterers. If you die, I doubt God will punish you for something that’s not clearly a sin. But this is a mere opinion 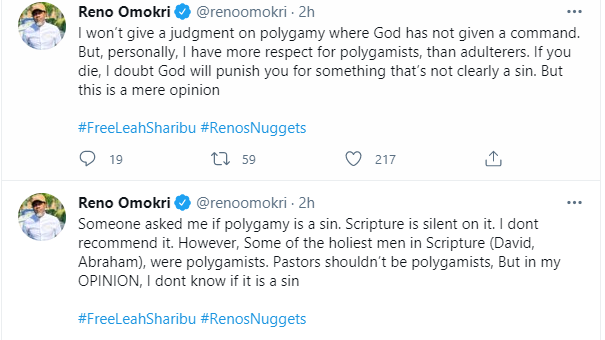