Harry Kane has won the Premier League Golden Boot for the third time in his career, after the Tottenham striker scored 23 goals for the season.

The England captain finished a single strike ahead of Liverpool’s Mohamed Salah, following his goal against Leicester in a 3-2 win on Sunday.

Kane has passed the 20-goal mark in the Premier League for the fifth time in the last seven years, though the first time since the 2017-18 campaign. 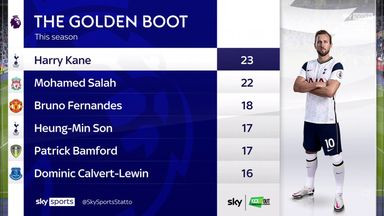 His 23 goals mark his fourth best goal tally in the EPL, though he has won the Golden Boot twice previously.

He achieved the feat in 2016-17, when he scored 29 times in 30 outings and replicated his record the following season when he hit the 30-goal mark for the first time.

Kane’s hat-trick of Golden Boots puts him up there with Alan Shearer who has won the award on three occasions.